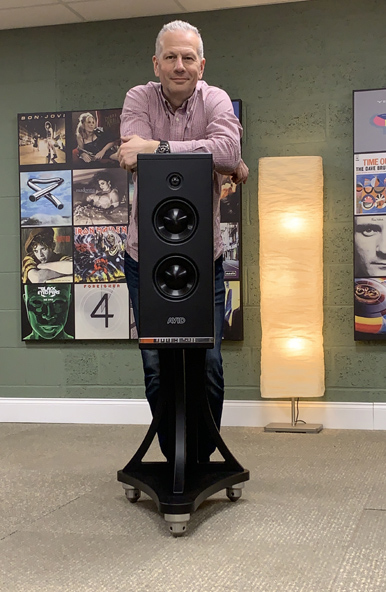 In 1977 when a friend showed the 16-year-old Conrad Mas his home constructed turntable, claiming that it was perfect, it triggered a lifelong obsession: to produce a genuinely flawless turntable, one without compromise.

Over the coming years, starting from scratch, Conrad re-examined and questioned every element of existing turntable design and manufacture, even when the textbooks said impossible. He soon realised that all turntables were limiting their true fidelity, typically because they concentrated on the technical values of rumble, wow and flutter measurements without attacking the real problem: vibration!

Family connections provided Conrad with access to universities that wanted to test his new theories, patents were applied for and the young man even started working in a foundry to better understand the process of casting metals. Little by little new designs emerged, step by step a radical project moved from paper into production and after almost two decades the Acutus turntable was born. Not an improvement over existing decks but a true innovation.

Today, the company has fulfilled Conrad’s dream of designing a complete analogue audio system, from ‘groove to ear’.  From cartridges and cables, amplifiers and speakers and now everything in-between, AVID is universally recognised as providing the pinnacle of listening pleasure through unstinting research and development in sound engineering.

Operating from two factories in England, with distribution across some 50 countries, the AVID team is dedicated to pushing physical and technical barriers in search of more than just sound quality and flawless design. Music should be an experience to savour and remember, captivating you, opening up thrilling new sound barriers every time you relax and unwind.

Today, Conrad is CEO of the company he founded back in 1995. But he is a CEO with a difference, remaining at the cutting edge of every innovation in equipment that now takes the listener all the way, from vinyl record to final sound.

Copyright 2023 AVID HIFI
Telephone: +44 (0)1480 869 900
Email: info@avidhifi.co.uk
Designed and built by Comtecs
This website or its third party tools use cookies, which are necessary to its functioning and required to achieve the purposes illustrated in the cookie policy. If you want to know more, please refer to the cookie policy. By closing this banner, clicking a link or continuing to browse otherwise, you agree to the use of cookies. View More
Agree and close